Three survivors have been found on the stricken cruise ship Costa Concordia, more than 24 hours after it ran aground off the Italian coast.
Rescuers are trying to reach a third survivor, hours after a honeymooning South Korean couple were rescued.
Three people are so far confirmed dead and about 40 are unaccounted for.
The captain of the Costa Concordia has been arrested on suspicion of multiple homicide. Prosecutors say he left the ship before evacuation was complete.Continue reading the main story
“Start Quote

Fulvio RocciSurvivor
First officer Ciro Ambrosio has also been detained.
The ship's operator, Costa Crociere, said the vessel had been following its regular course when it hit a submerged rock.
In a TV interview, ship's captain Francesco Schettino said the rock was not marked on any maritime charts.
Police are investigating why the accident happened in calm conditions.
Divers
The South Korean couple were located after rescuers heard voices from a cabin two decks down on the half-submerged ship late on Saturday. They were reached a few hours later.
The couple, both 29 years old, were both in good health when they were brought ashore.
Later on Sunday morning, rescuers located and spoke to the third person found inside the ship. Officials say he is a senior Italian member of the crew, and they believe he has a serious injury to his leg.
The BBC's Matthew Price, at the scene, says he can see two scuba divers trying to smash a window on the ship trying to get to someone inside.
Two French passengers and a Peruvian crew member died, and another 30 people were injured, two seriously.
Divers are continuing to search the ship, which is lying on its side near the Tuscan island of Giglio. 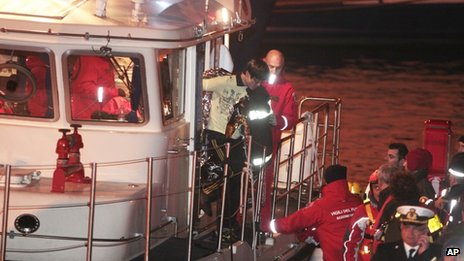 The South Korean man was brought ashore on a rescue boat, after being found with his wife
The president of Costa Cruises, Gianni Onorato, said the main task for the company was now to assist survivors and help repatriate them.
He said it was difficult to determine what had happened, but that the ship had experienced a blackout after hitting "a big rock".
Mr Onorato added: "We will be working in full transparency with Italian authorities" to understand the causes of the disaster.
He said normal lifeboat evacuation had become "almost impossible" because the ship had listed so quickly.
Francesco Schettino, the 52-year-old captain, had worked for Costa Cruises for 11 years.
The chief prosecutor in the city of Grosseto told reporters that Capt Schettino "very ineptly got close to Giglio", according to Italy's Ansa news agency.
ShakenContinue reading the main story
Analysis

Richard WestcottBBC transport correspondent
Investigators will now look into every aspect of this accident, but one of the key elements they will examine will be the electrical systems.
Modern ships tend to use electrical generators to drive the engines, so a power cut can leave the captain unable to steer away from danger.
Human error could also be a factor, and there will also be concern at the speed which the ship listed on to its side. Not only would that have been frightening, it seems to have affected the crew's ability to launch some of the lifeboats.
All ships have to meet safety standards set out by the International Maritime Organisation. Crews are trained to deal with emergencies, and cruise companies stress this kind of accident is rare.
Italian, German, French and British nationals were among the 3,200 passengers on board. There were also 1,000 crew.
On Sunday morning, UK Foreign Secretary William Hague told Sky News all the Britons - 23 passengers and 12 crew - were now safe and accounted for.
Coast guard captain Cosimo Nicastro told Italian TV that divers had carried out an extensive search of the waters near the vessel and found no further bodies.
On Saturday, survivors were taken to Porta San Stefano, about 25km (15 miles) away on the mainland.
The BBC's Alan Johnson at the scene says many arrived there still wrapped in blankets, and some were clearly very shaken by what they had endured.
Passenger Luciano Castro told Ansa news agency: "We heard a loud noise while we were at dinner as if the keel of the ship hit something."
"The ship started taking in water through the hole and began tilting." 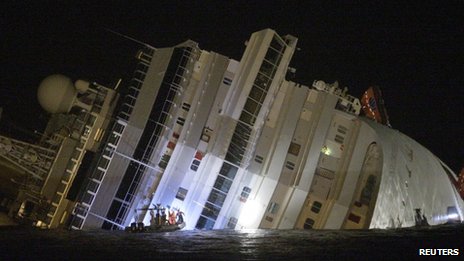 A big search-and-rescue operation continued overnight
Some passengers told the Associated Press news agency that the crew had failed to give instructions on how to evacuate the ship.
Several passengers compared the accident to the film Titanic, about the sinking of the giant ocean liner in April 1912 which claimed more than 1,500 lives. 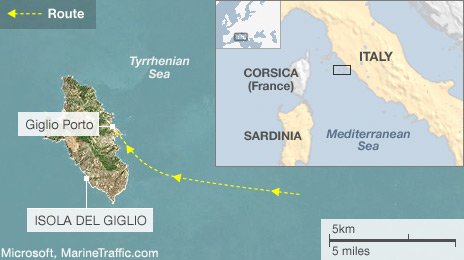 Were you on the cruise ship? Do you have friends and family on the ship? Are you on the island of Giglio? Did you witness the accident? You can send your comments to the BBC using the form below: