Eyewitnesses have described scenes of chaos on board the Italian cruise ship the Costa Concordia, which has run aground off Italy, killing three people.
A loud bang was the first indication that something was wrong.
It happened on Friday evening and marked the start of hours of panic among the 4,000 people on board the cruise ship.
The ship shuddered to a halt and was plunged into darkness.
"We were having supper when the lights suddenly went out. We heard a boom and a groaning noise. All the cutlery fell on the floor," Luciano Castro told Italy's Ansa news agency.
The passenger said people were told there were electrical problems.
Others described chaotic scenes as the liner began to move violently.
"The boat started shaking. The noise - there was panic, like in a film, dishes crashing to the floor, people running, people falling down the stairs," said survivor Fulvio Rocci.
Those on board said the boat suddenly tilted to the left. 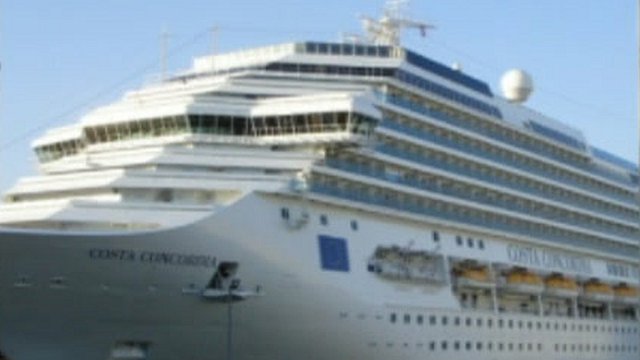 Cabin steward: 'We jumped into the sea'

"We told the guests everything was ok and under control and we tried to stop them panicking," cabin steward Deodato Ordona recalled.
It was about an hour before a general emergency was announced, he said.
Then the ship rolled again, now listing to the right, and the captain ordered the ship to be abandoned.
Mr Ordona said his colleagues and passengers were waiting to use lifeboats but the change in the direction the boat was sinking prompted them to seek lifeboats on the other side of the ship.
Monica, a German passenger who was in the cruise liner's theatre when the ship began to suffer problems, said it was hard to reach the lifeboats.
"It was difficult to walk. First it moved once, then to the left and then more on the right. The boat was tipping one side. You could see the ship was sinking more and more. In half an hour it sank halfway into the water," she said.
Cruise ship shop worker Fabio Costa said when people realised there was a serious problem, there were scenes of desperation. 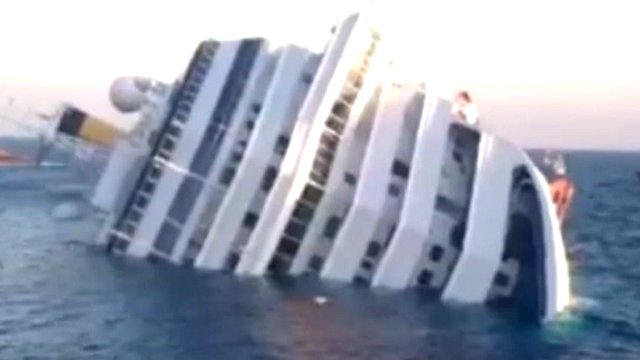 "Everything happened really fast. Everybody tried to get a life boat and people started to panic. A lot of people were falling down the stairs and some were hurt because things fell on them.
"Everybody was trying to get on the boats at the same time. When people had to get on the lifeboats they were pushing each other. It was a bit chaotic. We were trying to keep passengers calm but it was just impossible. Nobody knew what was going on."
He said children and women were given priority when it came to allocating places on lifeboats, but the system proved to be difficult to implement because many men "weren't accepting this" because they wanted to remain together as a family, prompting "huge confusion".
Some people decided it was too difficult to get on to a lifeboat and chose to swim, with a number safely reaching the nearby island of Giglio.
"We were on the same level as the water so some people started to swim because they weren't able to get on the lifeboats," said Mr Costa.
He said he saw some people jumping but could not get a sense of just how many people did so.
Elizabeth Nanni, of Isola del Giglio Tourist Information, said those who arrived on the island were survivors in a state of shock, ''desperate people looking for each other'' and people suffering from hypothermia after jumping into the sea.

"Usually there are 700 people on the island at this time of year, so receiving 4,000 people in the middle of the night wasn't easy," she said.
She said blankets and clothes were provided for those who arrived on the island, while churches and schools were opened to ensure that people had a roof over their head.
People were later moved to the mainland by ferries or airlifted by helicopter to the nearest hospital for emergency care.
But not everybody took a lifeboat or swam ashore.
Rescue teams searched for survivors and helicopters evacuated the last 50 people on the deck.
Rose Metcalf, a dancer who had been performing on the ship, was one of the last people to be winched to safety by a helicopter after clinging to the stricken vessel.