A British woman who escaped from the Costa Concordia cruise ship has told her father the scene "felt like the sinking of the Titanic".
Dancer Rose Metcalf, 22, had been performing on the ship when it ran aground off the coast of Italy.
She was one of the last people to be winched to safety by a helicopter after clinging to the stricken cruise liner.
Her father Philip, from Dorset, said she was safe but had feared she would have to jump into the sea.
At least three people were killed and many of the 4,000 passengers and crew tried to swim safety.
Mr Metcalf, from Dorset, said: "The ship had rolled on its side so she was ready to jump in the water.
"She said it was cold and dark just like the sinking of the Titanic."
The Costa Concordia hit a sandbar on Friday evening near the island of Giglio and listed about 20 degrees.
Mr Metcalf, from near Witchampton, said his daughter, who was not hurt, had been airlifted to an air base in the Tuscany region of Italy.
He said Miss Metcalf, who has been performing in a cabaret onboard the cruiser since October, had lost all of her possessions.
Mr Metcalf first heard about his daughter's rescue in a telephone answer machine message she left for him at about 03:00 GMT.
"Rose said she was OK and not to worry but that there had been a fire on the boat, that it had run aground and that she had been one of the last five passengers to be airlifted to safety," he said.

"She phoned back and told me she was in the restaurant having a coffee when all of a sudden there was a huge bang. She knew they had hit something.
"The ship started taking on water and listing straight away. She had her dress on as she had been performing, so dashed to the cabin to get changed.
"The ship rolled over on its side so they had to get a fire hose which they strung between the railings to stop them falling overboard.
"She thought she'd have to make a jump for it as it was dark and cold, like the sinking of the Titanic, but the helicopter then winched her off."
Mr Metcalf said his daughter was one of the last of the passengers to be rescued as she is staff.
"She was not injured but got checked over by a doctor", he added.
His wife, who is returning from a holiday in Malta without her mobile phone, is unaware of her daughter's rescue.
The Foreign Office said it was unclear how many UK nationals were among the 3,200 passengers.
It has set up a phone line for people who are concerned about their relatives and is offering advice on its website. 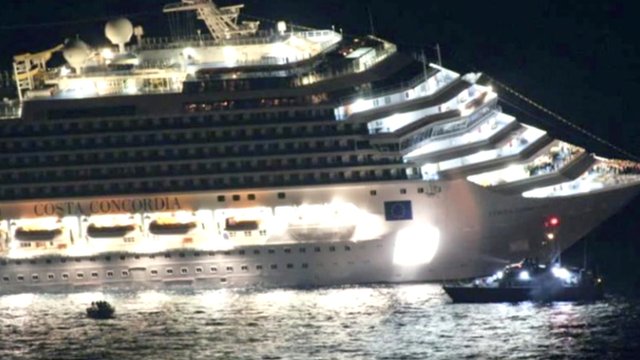