Ferry firm SeaFrance is to shed 127 jobs in Dover after it was liquidated by a French court and told to cease activity.
The Tribunal de Commerce decided SeaFrance's future after a bailout by the French government was ruled illegal by the European Commission.
The court also said an offer by a cooperative of employees was not acceptable.
Hundreds of jobs in France are also expected to be lost.
Three ferries were operated by SeaFrance on the Dover to Calais route. The service was suspended in November.
Conservative MP for Dover and Deal Charlie Elphicke said: "It is a real concern for the... people in Dover who have worked for SeaFrance and also their families.
"This is a difficult day and I think the heart of the whole community goes out to them.

Charlie Elphicke
"Obviously it's a real blow, [if] SeaFrance isn't operating that means there's less ferry traffic."
Sarkozy criticised
There were tears from SeaFrance workers who gathered outside the court in Paris to hear the decision on the firm's future.
Many were protesting over the handling of SeaFrance's fate, with one banner questioning why French president, Nikolas Sarkozy had not intervened to save the company.
Flares were lit in protest at the company's liquidation.
Eurotunnel has not ruled out a future bid for the cross-channel ferry firm, which employs nearly 1,000 people. 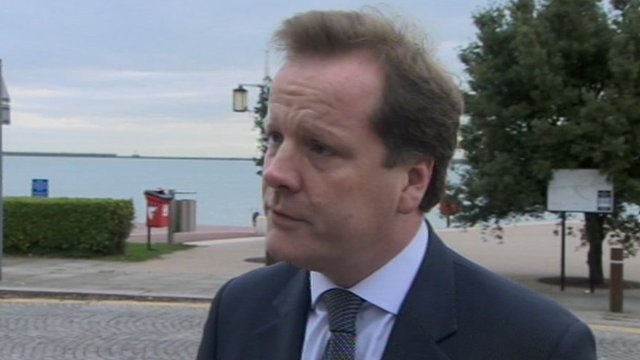 Charlie Elphicke MP: "The heart of the whole community goes out to them"

Mr Elphicke said of Eurotunnel's proposals: "Many people will want to know that they weren't simply going to buy them [SeaFrance's ferries] in order to scrap them.
"We need to make sure they give a clear plan as to why they are interested in the ferry business and not simply going to take out capacity.
"Everyone is working as hard as they can to ensure that their jobs will be safeguarded and working as hard as they can to ensure that those ships will be back on route with a new buyer and a new purchaser."
'Booking refunds'
A spokesman said Eurotunnel would "now be working to see what the fair value of the assets" were before making any decision.
The French firm went into receivership in 2010 and its company's ferries carried more than 3.5 million passengers a year on the Dover to Calais route.
A spokeswoman from SeaFrance said: "SeaFrance is sad to announce that the Tribunal de Commerce in Paris has made the decision to liquidate the company.
"Despite the best efforts of all parties, the court came to the difficult conclusion that none of the options available to it were financially viable.
"Provision has been made to ensure that all customers with pre-existing bookings will receive refunds."
She urged customers to contact SeaFrance for details.