About 200 seabirds have died after becoming trapped in a fishing net off St Ives, Cornwall, the RSPB has said.
The incident happened off Clodgy Point on Saturday.
The Cornwall Inshore Fisheries and Conservation Authority (CIFCA) said the fisherman had not breached a by-law which had been recently introduced.
It said the nets were away from an area of St Ives Bay where fishermen were banned from netting on Thursday after the deaths of more than 100 seabirds.
Chief Officer Edwin Derriman said: "The fisherman was well away from the banned area.
"As a result, fishermen are now fishing much further off-shore."
'Died of drowning'
Paul St Pierre from the RSPB said: "This is of great concern. At this time of the year birds such as guillemots and razorbills are frequently found near the coast feeding on sprats in the same areas used by local fishermen."
The charity said that onshore winds and a rise in fish numbers had caused more birds to be in the area. 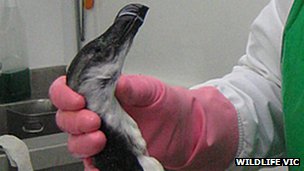 Wind conditions and a rise in fish numbers had caused more birds to be in the area, the RSPB said

"Unfortunately conditions have conspired to bring them into greater proximity than normal with the result that large numbers of birds have been trapped in the nets and drowned."
Cornwall Wildlife Trust collected a number of dead birds from Porthmeor Beach during the weekend.
The birds were examined by a local vet. They died of drowning, the RSPB added.
'Extend by-law area'
The area around St Ives Bay has been closed to fishermen from 5 January. Anyone found netting in the exclusion zone could be fined up to £50,000.
The suspension enforced by the St Ives Bay Gill Net Fishery By-law is thought to be the only one of its kind in the country. It is expected to end on 26 January.
CIFCA said the temporary closure affected the area of the bay "on the landward side of a line drawn between St Ives Head and the northern extremity of the Black Cliffs (east of Hayle estuary)".
Ruth Williams, from Cornwall Wildlife Trust, said: "We would hope that as part of their investigation and future discussions, the CIFCA may see fit to extend the area covered by this by-law to give the protection needed to these seabirds."
Mr Derriman said he did not know how or whether this incident would affect the temporary by-law.