Skye Boat And Plockton Cruiser To Join A890 Efforts

A stretch of road in Wester Ross shut by a landslide on 22 December could be closed for up to a further four weeks, Highland Council has warned.
Rock and debris from the slip and another that occurred a few days later have been cleared from the A890.
However, consultants and geologists are examining the potential for further landslides along the section of road.
A tourist boat and a community-owned ferry could be introduced on Wednesday to help ease travel in the area.
The A890 helps to connect Lochcarron to Plockton, and its high school, and eventually with Kyle, on the opposite site of Loch Carron.
The road runs across the top of the loch to link up with the A896, the main road to Lochcarron.
About 60 schoolchildren who would normally travel by road to Plockton High School made part of the journey by train on Monday because of the closure.

The A890 is open as far as Strathcarron from where the youngsters took the train to Plockton.
Because of the train timetable, the pupils missed their first two periods of the day but will do supervised homework before making their return journey.
Highland Council and ScotRail have come to an arrangement on the cost of the travel.
Most of the pupils will take the train again on Tuesday.
On Wednesday, Highland Council hopes Calum Mackenzie's cruiser Sula Mhor will travel from its berth in Plockton and pick up the children from North Strome, on the Lochcarron-side of Loch Carron.
A small community-owned car ferry from Glenelg is also expected to run between North and South Strome from mid-week.
The 40-year-old craft can take six cars at a time.
Called the Glenachulish, it is the last manually operated turntable ferry in Scotland and continues a 77-year-old tradition of a car ferry crossing the Kylerhea straits between the mainland and Skye.
A ferry service has not run at Strome since the 1970s.Continue reading the main story 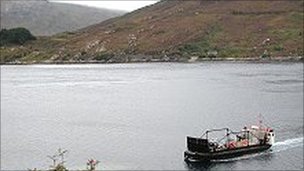 In the 1800s, the service was crucial to the distribution of mail in the area and delivery staff would blow a horn to attract the ferryman's attention, according to the website Am Baile.
Highland Council has also been discussing with Network Rail the possibility of road traffic being able to get a round the affected part of the A890 by travelling along the nearby railway.
In October 1990, traffic was allowed onto the line after rockfalls in the same area.
The method uses railway sleepers and would end the need for motorists to make a 140 mile (225km) diversion.
However, it is not an easily achieved solution as measures would be needed to prevent traffic from going into Loch Carron next to the railway.
Network Rail would also have to make sure its insurance covered cars travelling on the line.
Meanwhile, Highland Council faces significant costs to deal with the A890's problems.
The affected stretch is expected to stay closed for between two to four weeks.
Contractors were brought in to clear the landslides.
Other fees will be incurred from consultants and geologists who are assessing further risks to the road and there will be the final solution to the problems to be paid for.