An emergency effort to pump water out of the Royal Yacht Britannia has started to fix the list it developed when being moved to be repainted.
The yacht was tilting on its starboard side by four degrees after developing a leak in a door seal.
The leak was discovered when officials noticed the ship was tilting and went to alter ballast levels.
The yacht, which is now tilting by two degrees, was being moved at 09:30 to a dry dock across the harbour in Leith.
At least four fire engines are at the scene.
Two units from Lothian and Borders Fire and Rescue Service in Hawick have also been called to the Britannia with a high-volume pump on what they said was an emergency call.
The Royal Family is always kept up to date with any developments concerning the former Royal yacht.
Bob Downie, Britannia Trust chief executive, said: "When we were removing the final mooring ropes this morning the ship moved four degrees to starboard.
"This meant that new access watertight doors to our pontoons were below the water level.
"There has been a leak in the seals on those doors which was accentuating the list. 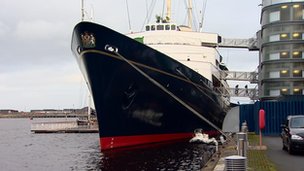 
"Because we have had limited shore power we asked the fire brigade to provide us with some assistance in correcting the ship's ballast.
"This has caused a delay in the process. Britannia has been secure at all times and we hope to continue the move to dry dock later or on Saturday."
It is the first time the yacht has been moved from its berth in Edinburgh in almost 14 years.
It is due to reopen to the public on 1 February.
Work began on the ship at John Brown's shipyard in Clydebank in June 1952 and it was launched in April 1953.
Last year was one of the attraction's busiest years with more than 275,000 visitors, a 12% increase on the previous year.


I always see both sides of the argument, the one that's wrong and mine.....

the leak was discovered when they noticed the boat tilting?

thought they would of had bilge alarm rigged to a yellow flashing light at least?.

Back to Media Coverage Of Any Maritime Issues