Fisherman Attacked By French Say 'bring In The Navy'

Fisherman attacked by French say 'bring in the navy' 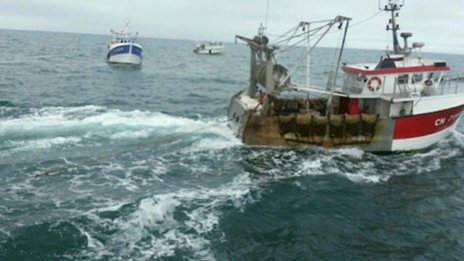 Norman Baker, Lib Dem Transport Minister, said up to 40 French boats may have surrounded five British fishing vesselsContinue reading the main story
Related Stories Fishermen are calling for Royal Navy protection after claims they were attacked by French vessels.
Kevin Lochrane, from East Sussex, said he was surrounded by seven or eights boats in international waters 15 miles off Caen in a dispute over scallops.
One Scottish fisherman, Andy Scott, said he feared for his crew's safety during the incident.
Other crewmen said they were also surrounded by the French fishermen, who they said tried to damage their gear.
'Called for assistance'
Clinton Powell, from Devon, said: "Something has got to be done and we need naval protection."
Anton Bailey, from Brixham, claimed four French boats "threw rocks and tried to ram us". 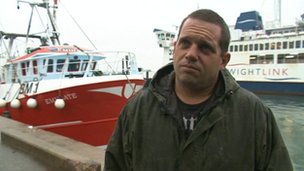 Mr Lochrane, from Newhaven, said he had to call his crew off the deck "as it was unsafe".
"I called other vessels for assistance and when they arrived they had ropes fired at them too, and nets and ropes were put in the water to disable us."
He said the French fishing protection vessel refused to intervene.
"I've been at sea for 20 years and never seen anything like it," Mr Lochrane said.
"Our worry is if this all kicks off again then we're not getting any help from anybody.
"Maybe we could have our own naval vessel to assist us if this should ever happen again."
Mr Scott, of Dumfries-based Scott Trawlers, said three French fishermen eventually boarded his vessel and spoke to the skipper.
"He was able to satisfy them that he was legally entitled to fish there," said Mr Scott.
'Looks like premeditation'
Liberal Democrat Transport Minister Norman Baker, who is MP for Lewes, said: "So far unverified reports suggest that up to 40 French boats surrounded five British vessels who appeared to be fishing legally, albeit in French waters. 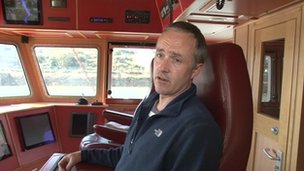 
"That looks like premeditation and attempt to intimidate. Clearly we have to establish the facts.
"I will be raising this with Defra so that they can discuss it with their French counterparts."
The Maritime and Coastguard Agency contacted French coastguards, who sent a patrol vessel to the area and said the French authorities were "continuing to monitor the situation".
No-one has been available for comment from the French fishing authorities.
Mr Powell, who was fishing onboard The Golden Fleece Two, said: "None of our skippers could get away with it, we'd be locked up and legal action taken right away."