Fishermen Rescued From Liferafts After Boat Catches Fire Off Orkney 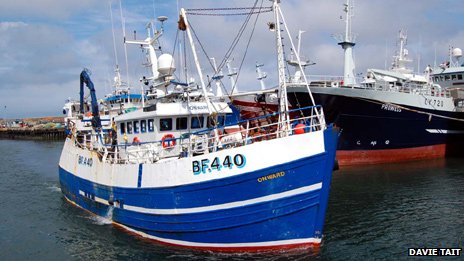 The Onward caught fire on Wednesday afternoon and later sank
Five fishermen have been rescued from liferafts after their boat caught fire about 50 miles from Orkney.
A signal from a distress beacon on the Banff-registered fishing boat "Onward" was picked up at about 13:30.
But it was not until the vessel was spotted from the air that it was discovered it was ablaze.
The men were airlifted by helicopter and are now being treated in Kirkwall for the effects of hypothermia. The boat has since sunk.
Shetland Coastguard Mike Smith said: "This incident shows the importance of having a registered distress beacon and how important they are when you have an emergency.
"We are pleased that all five crew have been rescued and are now in the hands of the medical professionals."

I always see both sides of the argument, the one that's wrong and mine.....
Back to Fishing Related Media Coverage