Weather Calms As Coastguard Search For Five Missing From Trawler


3 replies to this topic

From the Irish Examiner 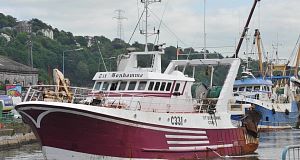 Fears are growing for five people missing after a trawler went down off the west Cork coast, but

strong winds and heavy seas which were hampering the search and rescue mission have calmed.

One survivor, an Egyptian national, was been pulled from the sea close to Union Hall Harbour, where the 21-metre (69ft) Tit Bonhomme was thought to have struck rocks in the early hours of this morning.

The Irish-registered fishing vessel was coming into shore when it got into difficulties beside the Adam and Eve islands, just outside the harbour.

The crew made a distress call to the Coast Guard at around 6am, but it was cut off and all radio contact was lost.

It is understood the captain is Irish.

Coast Guard helicopters from Shannon and Waterford were scrambled to the scene, while lifeboats from Courtmacsherry and Baltimore have been launched.

The survivor found in the water at around 8am has been taken to Cork University Hospital, while five other crew members are still missing.

Vincent O'Donovan, of Courtmacsherry Lifeboat station, said the Tit Bonhomme had taken a battering in the rough waters.

“Conditions had been bad all last night and this morning,” he said. “It was force 7 to 8, and it was a south-east wind, which causes difficulties off that coast.”

The lifeboat launched shortly after 6am and spotted debris in the water close to the mouth of Union Hall harbour, believed to be wreckage from the trawler, around an hour and a half later.

Initial reports suggested two more survivors had made it to onshore rocks, but confusion remains, and the Coast Guard – which is leading the operation – said five people remain missing.

Hopes were fading tonight for the safe return of five men missing after a trawler sank off the west Cork coast.

A 21-year-old student from Clonakilty, Co Cork, who was interested in taking up a career at sea, is thought to have been onboard when the vessel went down close to Union Hall harbour.

Skipper Michael Hayes, a married father from Ring, Co Waterford, who had been living in Union Hall for years, and four Egyptian men, aged in their 20s, were also on the 21-metre Tit Bonhomme.

One of the Egyptian fishermen was rescued and is said to be in a comfortable condition at Cork University Hospital.

Distraught relatives of the missing men gathered on the wind-swept pier throughout the day waiting for news on the whereabouts of their loved ones.

It is believed the Irish-registered vessel struck rocks, known locally as Adam and Eve Island, just moments away from the pier in the early hours of this morning.

Crew made a distress call to the Coast Guard at around 6am, but it was cut off and all radio contact was lost.

A massive search by Coast Guard helicopters from Shannon and Waterford, and lifeboats from Courtmacsherry and Baltimore was stood down this evening until first light tomorrow morning.

The Naval Service vessel LE Niamh and up to 15 local trawlers had also joined the operation.

Strong winds and heavy seas hampered the search and rescue mission throughout the day.

Vincent O’Donovan, of Courtmacsherry Lifeboat station, said the Tit Bonhomme had taken some battering in the rough waters.

“Conditions had been bad all last night and this morning,” he said. “It was force 7 to 8, and it was a south east wind, which causes difficulties off that coast.

“It was very bleak with a very heavy swell.”

The lifeboat launched shortly after 6am and spotted debris in the water close to the mouth of Union Hall harbour, believed to be wreckage from the trawler, around an hour and a half later.

But despite efforts throughout the day, no other survivors were found.

Navy and Garda divers are to examine the wreckage, which is grounded on the seabed and partially visible at low tide, tomorrow as a full air, land and sea search is resumed.

Declan Geoghegan, Coast Guard operations manager, said: “I’d be very surprised if we are looking for survivors at this stage.”

Mr Geoghegan said it was possible bodies could be still onboard the Tit Bonhomme, if it went down quickly and they became trapped.

“It’s not that easy an area to search,” he added.

A tattered life raft was among debris pulled out of the sea during hauls by locally-based trawlers.

The Tit Bonhomme was formerly a French-registered trawler, which was co-owned by Mr Hayes until recently, when he took sole control.

It is believed the crew left shore on Friday but were not expected back before Sunday. Garda interviews with the survivor are expected to throw light on what exactly happened.

“The tragedy that has hit this community is awful for everyone,” he said.

“A lot of people here are involved in fishing, it’s a big thing in Union Hall.”

Just last month, three fishermen were rescued from a life raft after their trawler sank at the same spot.

The Jeanette Roberta was sailing out from Union Hall pier when it went down close to Adam, the larger of the two rocks at the narrow entrance to the harbour.

Searches for the five missing crewman from a trawler which sank off the West Cork coast have been called off for a second night.

The Tit Bonhomme sank during a squall early yesterday after running aground near its home port of Union Hall.

Throughout today, the air and sea search continued as families waited in Union Hall for news.

The mother of the youngest missing crewman Kevin Kershaw said: "I'm not giving up yet. There's still hope."

It is thought Kevin had gone out on the vessel with a view to considering a career in fishing.

The sole survivor Mohammed Add Elgwad, who is from Egypt, also left hospital to visit the pier today. He told this friend that the seas were very rough yesterday, that the vessel's windows had broken and that the wheelhouse had filled with water.

Heavy swell prevented divers from reaching the wreck. It is hoped conditions will improve for the search tomorrow.

Mr Hayes, 52, was originally from Waterford but had been operating the trawler out of Union Hall in West Cork.

Garda divers at the wreck site off Adam Island, Union Hall, west Cork, during yesterday's search for the missing crew of the sunken trawler

The body of Egyptian fisherman Attea Shaban (26) from the Tit Bonhomme  was found by Garda divers at around 9.45am this morning.

Later, a second body was located. It is believed that body was found some 100 yards from the sunken vessel. Relatives of that victim were brought to the quayside.

The body has now been removed to Cork University Hospital.

Five crewmen from the Tit Bonhomme  went missing after the boat sank near the entrance to Glandore Harbour on Sunday morning.

Exact details of where the body was found remain sketchy, but it is understood that it was not found on the wreck of the sunken trawler.

Divers are still waiting for the weather to improve to allow them get into the trawler near the mouth of Glandore Harbour.

Divers searched around the vessel yesterday which, is wedged in a crevice on Adam Island, but they still have to go inside the boat.

An account has been set up for the families of the missing fishermen, and donations can be made to the Trawler Search fund, AIB, Skibbereen.


I always see both sides of the argument, the one that's wrong and mine.....
Back to Fishing Related Media Coverage