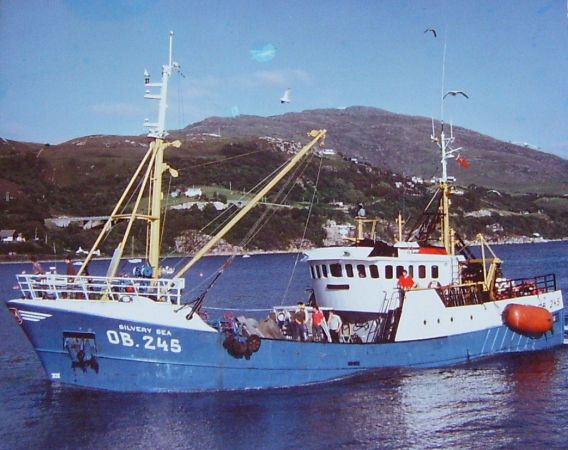 At 0607 Universal Co-ordinated Time (UTC) on 14 June 1998, the UK registered fishing vessel Silvery Sea collided with the German registered container ship Merkur about 35 miles west of Esbjerg, Denmark. This caused Silvery Sea to founder with the loss of her five-man crew. The Department of the Environment, Transport and the Regions' (DETR) duty officer notified the Marine Accident Investigation Branch (MAB) of the accident at 0912 that day. Captain P Kavanagh carried out the investigation.
Silvery Sea was on passage from the fishing grounds near the entrance to the Firth of Forth on a true course of and making a speed of about 9.3knots. She was fully loaded with her catch of sand eels and making for Esbjerg on the west coast of Denmark to land it.
Merkur was on passage from Hamburg to Gothenburg,partly loaded with containers. She was making good a course of 340"and a speed of 15 knots. The chief officer and a seaman were on watch at the time of the incident. The weather was fine with good visibility and it was daylight. There was no other traffic involved in the incident.
Shortly after 0530,Merkur 's chief officer saw an echo on the edge of his radar screen. It was on his port bow at a range of about 7 miles. As the bearing of the echo did not change, he assessed that a risk of collision existed. Using his binoculars, he identified the echo as a fully-ladenfishingvesselonaneasterlyheading,probablymakingforEsbjerg. Shewasnot engaged in fishing. A, crossing situation existed, and by the International Regulations f o r Preventing Collisions at Sea (Collision Regulations) it was the fishing vessel's responsibility to keep out of the way of the vessel on her starboard bow, the German container ship. The chief officer, in the stand-on vessel, maintained his course and speed.
There is some doubt as to whether or not the chief officer left the bridge before the collision. However, the evidence indicates that at 0600, he plotted Merkur 's position and entered it into the deck logbook. He: then returned to the navigation console and saw that the fishing vessel had taken no avoiding action. Realisingthere was a risk of an imminent collision,he sounded a warning signal on the whistle. The fishing vessel did not respond,and although Merkur's chief officer altered course to starboard,it was too late and the two vessels collided.
The fishing vessel sank very quickly. Merkur's chief officer sounded the general alarm, called them aster and made a distress call. It was received by Lyngby Radio and despite an extensive search by a number of vessels and a helicopter, no survivors were found.
Later on, Danish divers retrieved the bodies of all five fishermen from the wreck.
The cause of the collision was twofold. Silvery Sea did not keep out of the way of Merkur, and Merkur's chief officer did not take avoiding action sufficiently early to prevent a collision.
Silvery Sea foundered because she was holed forward and pushed down in the collision. Water was able to progressively flood the full length of the vessel through open doors in the transverse bulkheads.