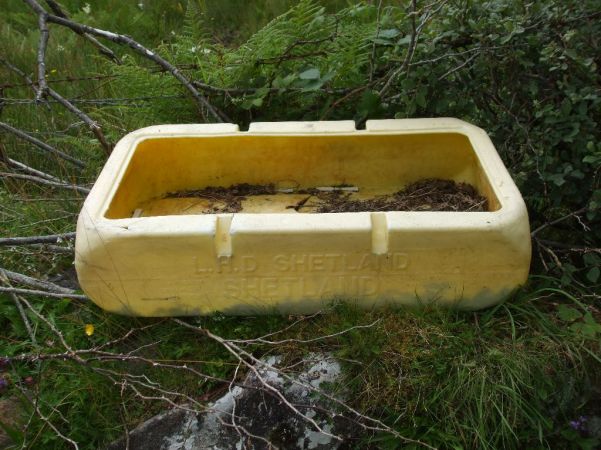 I know the herring lads went to some gey droll places at times,but 5 miles inland and halfway up a hill?? If it wasnae them that chucked it over the side then it was a helluva height of tide that put it there! A SAD DAY IN GRENÅ
By John Garriock


The Vega
ONE OF the saddest days of my fishing career was walking up the pier and leaving the Vega to go to the breaker's yard at Grenå in Denmark. While we'd had her up for sale before being granted decommissioning it would be true to say that she was near the end of her commercial life as a fishing boat.

The Vega started life as the Arctic Riever for Boyd Line Ltd of Hull, but was registered in Granton with a fishing number GN 23. Her keel was laid on the 6th September 1974 and with an overall length of 41.97 metres and a tonnage of 401.96, was a sister ship to the stern trawler Arctic Challenger, both of which had very modern layouts for vessels of their day.

After fishing the distant water grounds and for mackerel, because of various restrictions their owners tied the vessels up and put them both up for sale. This was to be followed with one of the boldest moves in Shetland's white fish history when a partnership headed by Russell Smith went to Hull and bought the Arctic Riever and renamed her Vega cs LK 330.


Russell Smith
They started fishing in July 1986, and looking back at the log books and diaries makes some incredible reading. After one trip around Shetland it was off to "The Rock" for a landing of 1,420 boxes of mainly haddock, to gross over £40,000, landing in Scalloway. Next trip back at "The Rock" was a remarkable trip of 950 boxes of which over 800 boxes were squid which grossed a record breaking £86,144 for only 5 days fishing. This was to be her best trip ever, and when we remember that this was in August 1986 it is even more remarkable.

After more big landings that year on the squid (which never appeared as good in the following years) the Vega went on to make some huge landings of high value monkfish, landing over 400 boxes of monks three times and over 300 boxes several times.

The biggest catch was 2,160 boxes of cod from Bear Island, landed in Lerwick, which is still a record breaking white fish landing for Shetland. During her time in Shetland she grossed almost 10 million pounds and landed over 182,000 boxes of which nearly 43,000 boxes were monks. To try and put this into perspective, if you were to set the LHD boxes end for end from the Lerwick Fish Market to the Scalloway Fish Market (approximately 6.6 miles) they would be almost 14 wide. If we could see all that fish set out in one day I am sure we would have some traffic problems and the fish buyers would be very excited to say the least.

While some of her catches were landed in Aberdeen, Hanstholm, Faroe, Lochinver and Scrabster, a huge part was landed in Shetland, and most of her repairs, painting etc. was done locally plus nearly all her nets were made in Shetland.

One of the things the Vega will be best remembered for was "breaking out" new bottom to the west of Shetland around Rockall and Faroe. Many of these tows are still used by other Shetland and Scottish boats who now know where all the wrecks and fasteners are that the Vega found the hard way.

While the Vega was in Shetland her fishing skippers were Russell Smith, Ian Walterson, George Hendry, James Anderson, myself, John Garrick and Francis Fraser. A total of 96 men went to sea on her, including several young fishermen who did their youth training onboard.

The Vega was a very good sea boat weathering many a storm, one of the worst being the 'New Year's Hurricane,' when the crew had to stop fishing and lie head of wind to dodge out of the storm while taking in the New Year of 1992.

Overall the Vega has been a good ship for Shetland, with a huge part of her gross earnings going into the Shetland economy. I personally would like to say thanks for the help and inspiration that the original owners Russel Smith, Ian Walterson, Billy Hughson, Lyndon Mouat, Ronnie Couper and Maurice Williamson have given us, and I am sure that this is echoed by all the men who have made good wages from her, and also everyone in Shetland who has benefited from their very bold move in bringing the Vega to Shetland over 11 years ago.