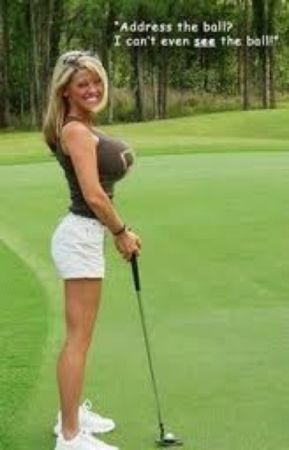 Last year a small group of guys from fishing boats in the clyde and members from here arranged a golf funday challenge, this year we are looking for more people to come and enjoy a day out have a good laugh and well maybe a pint or two will be had as well
If you think your tiger woods or more colin montgomery and are free on the 16th april please give me a shout and we will add your name to the list for the day the round of golf and a meal afterwards will be costing no more than £30 we hope it will be at one of the local courses in ayr.
We have two groups for low and high handicap players, trophies, cash prizes and fun prizes I'll tell you the story of Big Nellie May,
She took up the golf in a serious way.
With her shiny new clubs and her big plastic bag,
She could easily pass for John Daly in drag.

Now Nellie was handicapped more than the rest,
Her swing was impaired by the size of her chest;
Her over-development was her downfall,
When she swung, they both swung and they all missed the ball.

Now Nellie decided they hampered her stroke,
So she tethered them up with a big piece of rope.
But they did not like being tied up in a noose;
And with the very next stroke both those rascals broke loose.

In sheer desperation she turned to the pro,
Who looked at poor Nell and said "I don't know...
I've only seen two that look like yours do,
And they're on the camel that's in Calderpark  Zoo."

This pointed remark at the poor girl's physique
Made Nellie lash out in a great fit of pique.
Her blow caught the pro in his most precious spot,
And now he's got two just as big as she's go