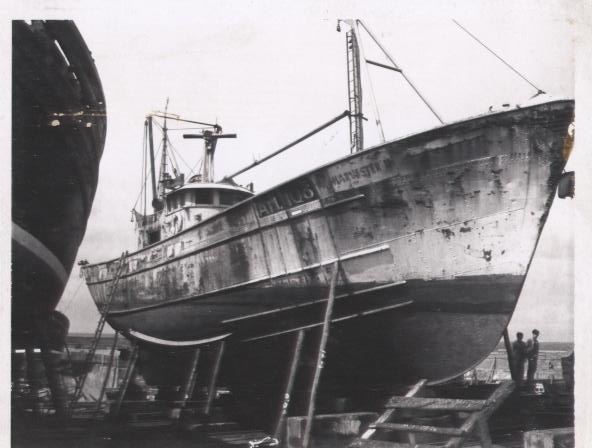 This is an interesting piee to go with your photograph - courtesy of the Berwick Advertiser @ http://www.berwick-a...king.5154348.jp

A BERWICK-built fishing trawler still plying its trade in the North Sea is celebrating its 50th birthday this year.

The Craigielea built by the Fairmile Construction Company was launched at Tweed Dock on September 17, 1959.

It has since been renamed the Denarius and is the oldest boat in the Fraserburgh fleet in north east Scotland.

"The vessel's performance also indicates the quality of maintenance and extensive modernisation work that has been invested in the trawler."

The Craigielea A320 was originally built as a side trawler for George Robb and the Bon Accord Company in Aberdeen.

It was based on a hull design originally known as the Fair Isle class, a reference to the amount of time these vessels spent fishing around Fair Isle.

The first in the Fair Isle class was Coral Isle SN22, completed in 1956 for North Shields fish merchants J Rutherford.
The vessels were built at Berwick under the White Fish Authority's grant and loan scheme designed to encourage the replacement of an ageing fleet with more compact and economic vessels.
The Fair Isle class vessels were nicknamed 'Sputniks' after the Russian satellite of the time.

Craigielea was the third of five Sputniks launched at the Fairmile Shipyard in 1959 for the same Aberdeen owners.

In the Berwick Advertiser, Alderman T Evans, managing director of the Berwick Shipyard, said: "The trawlers have been inspected by those interested in the fishing industry, and we have been told that they were most impressed. We are hopeful that we shall obtain further orders for a similar type of fishing vessel."

In 1964 the Craigielea was bought by Arbroath skipper Tom Beattie who rigged her for seine netting and renamed her Harvester II AH106. The distinctive white painted boat continued to fish mainly from Aberdeen.


In 1966, John Gibson and Partners of Gardenstown bought the vessel to fish from Macduff and renamed her Onam BF433.

By the early 1980s, by which time a whaleback had been added, Onam moved further west along the Moray Firth after being bought by Alastair Kennedy of Burghead. Later renamed Jasmine INS248, the boat was converted to work trawls over the cruiser stern in a major refurbishment which included fitting a new deck casing, wheelhouse and gutting shelter amid-ships.

Robert Hepburn, of Banff, bought Jasmine in 1991 and renamed her Shamal BF16. The boat was modernised and converted for twin-rig trawling by Macduff Shipyards and fitted with a three quarter length shelterdeck.
Mark Robertson bought Shamal in 1999 and renamed it Denarius BF804. In 2006 it was fitted with a new Mitsubishi engine, gearbox and tailshaft.

It now usually works four to five day prawn trawling trips from Fraserburgh. Working through United Fish Selling of Buckie, it also spends time in the Moray Firth on the later summer squid fishery.
Graham Toward, an authority on Berwick shipyard, said: "Fishing vessels are usually scrapped after 25 or 30 years so the Craigielea has done well.

"They were a good class of trawler. When they did a major refit of the boat in 2006 they surveyed the hull and the steel - even after 50 years - was much stronger than what they use today."
More information on the Fair Isle vessels is available at www.berwickshipyard.com.