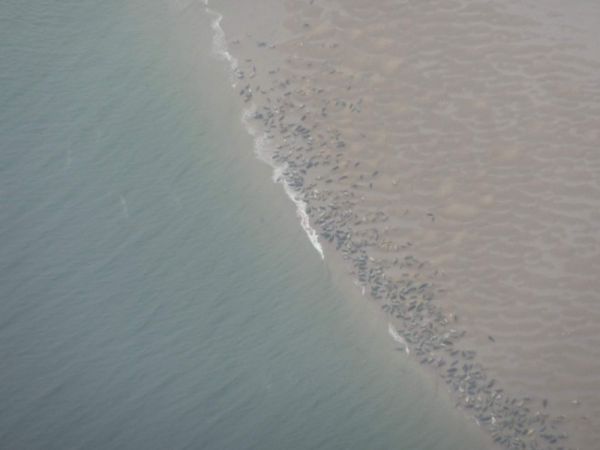 Having a wee lie down after their lunch

westword
Aug 18 2010 05:52 PM
yi can't shoot them , they keep a lot of people in a good job , yi see they nee ti track them movments ti undersand what they feed on , they must be a hell of a complex  animals cos the've been investigating them for more years than a can mind, a would'ny like ti see the fish that lot on the beach get through in a year , mybe they should pump some money in ti a way ti sterilizing them cut the population down and give the fish a chance , mack rill
Aug 19 2010 07:10 PM
there are a lot more seals than this at the tay mooth, thir would be a lot less if the stake nets were still being fished at kinshaldy , its legal for salmon fishers to shoot seals near nets

What happened to the seals?

Dozens of dead seals have washed up in Scotland with strange spiral wounds. What could be the culprit?


It's a mammalian mystery that would baffle even Sherlock Holmes: the unexplained deaths of dozens of seals, found washed-up off the coasts of Norfolk, St Andrews and the Firths of Forth and Tay, their bodies horribly lacerated.

Seven common and grey seals  their corpses torn by a single, deep, corkscrewing cut  have been found in Scotland over the last two months, prompting an urgent investigation by the Sea Mammal Research Unit (SMRU) at St Andrews University. And in Norfolk, police are working with the RSPCA to rule out foul play in the deaths of at least 20 other seals, discovered with similar injuries since last November.

So what monster of the deep is to blame? Suggestions posted by amateur sleuths on online message boards range from a stray "cookiecutter" shark (this grim predator takes hold of its prey and spins it round  but as the shark usually inhabits tropical waters, it's unlikely to have strayed into the North Sea), to the ventilator on a naval submarine, a ship's propeller, or an underwater wave-power turbine.

According to Gill Bell of the Marine Conservation Society, an underwater blade is the most likely culprit. "Most seals are very wary of propellers," she says. "But the seals may have been caught in the draft of a powerful current, and been dragged through a rotating blade." The scientists at the SMRU stress that their investigations are still under way  but agree that the blame is unlikely to fall on a marine predator. "If it was a shark killing these seals," says researcher Callan Duck, "it would need to have just one tooth, and one jaw, to cause this kind of single, spiralling cut  which just isn't possible."

Duck is reluctant, as yet, to "play the blame game"; but he says that the more likely culprit is a "cowled thruster"  a caged propeller used by ships, such as oil-rig support vessels and tugs, that need to remain stationary in the water for long periods. The seals could have swum close to such a propeller, and met a gruesome end when it was suddenly switched on.

"Most seals know what's bad for them," says Duck. "But these ones may have gone looking for fish, and then been sucked to their deaths."

Members of the public, who may have documented similar events, are being asked to send information or photographs to smruseal@st-andrews.ac.uk, or by calling 01334 462 630

young ronnie
Aug 20 2010 12:05 PM
Re-Part of Steve's quote from the Guardian about the Norfolk police getting involved.That just says it all nowadays.Phone the plod to report a burglary/mugging/assault/scumbag vandals trashing your car outside your door or any one of a hundred other things and you will be told "sorry not enough manpower to spare"...a dozen feckin' seals get the chop and it's "how many officers do you want on the case,funds unlimited?"...jaysus,give me strength! I've not got a problem with seals..live and let live is my motto,but FFS why can't the stupid do gooders in this country take their talents somewhere else before they ruin us all.

westword
Aug 20 2010 05:40 PM
fair point ronnie , them do gooders is them and the same though that eventually get funds and the backing to take the conservation to new hights, when wee were  young yi could sail oor ti the likes o the may isle and have a traipse aroond and fun , today if yi even breathe the wrong way and yi.ll be in bother more like big brother scenario if yi pick up a birds egg its 3 months in the slammer ha ha, like all these things they go to extremes

why no just bite the bullet and have a proper cull and get the numbers to a realisic number with all dieseases associated with overpopulation a dont think folk would not understand that.

young ronnie
Aug 20 2010 06:23 PM
As soon as ye mention the word "cull" Davie,the barmy armies start tae muster and they march on ye.A sensible cull,(no one that involves big widden clubs though!)would be far better for maintaining the population at a decent health and number level,rather than letting them get out of hand and more susceptible to diseases,but try telling that tae the seal huggers.None so blind as them that cannae (or in their case willnae)see