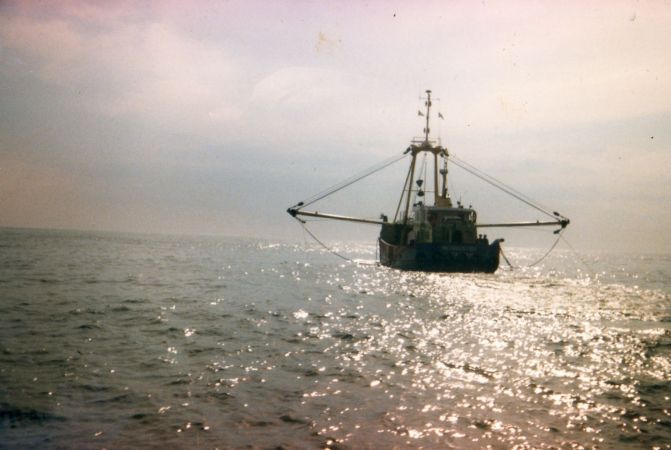 At about 1630 UTC on 13 December 2005, the 23.78m steel hulled Belgian beam trawler, Noordster, caught her port trawl gear on a fastener while fishing 11.5nm south of Beachy Head. During the ensuing attempts to free the gear from the fastener, Noordster listed rapidly and capsized. There was only one survivor of the four crewmen
on board.

After Noordster became fast, the starboard trawl gear was hauled first to the surface, and the derrick was raised and the net and beam brought clear of the water. The port gear, with its derrick in the normal horizontal towing position, was hauled until the warp was tight, causing the vessel to list to port. The three crewmen on deck moved to the starboard side of the vessel as water came through the freeing ports and then over the port bulwark.

In the wheelhouse, the skipper attempted to call another Belgian beam trawler at about the same time as the main engine stopped. He then shouted to the crewmen through an open window, that he was unable to do anything more. The starboard trawl gear, hanging from the derrick head, probably then swung inboard and Noordster rapidly capsized to port. The crew then found themselves in the water. None of them were wearing lifejackets.

The youngest member of the crew swam to the upturned hull and managed to climb on to it. He saw the other two deck crew float past, face up, but he was unable to pull them on board the hull, and they floated away. A short while later, he heard knocking noises from within the hull, and assumed that the skipper was still inside the vessel.

It soon got dark and the survivor saw a number of ships pass by, but he was unable to signal to them.

The following morning, a passing ship saw the upturned hull and the survivor and raised the alarm. An intensive search and rescue operation began immediately, coordinated by Dover MRCC. The survivor was rescued by a Coastguard helicopter and a search by military and civilian vessels located and recovered the bodies of the two crewmen. Navy divers entered the hull of the wreck to search for the skipper, but were unsuccessful. His body was located a short distance away by other search units. However, before it could be recovered, the skippers body sank and he has not been seen since.

Noordster began to drift, and she sank 2 days later in the separation zone between the southwest and north-east lanes of the Traffic Separation Scheme.

MAIB organised an ROV and diver survey of the wreck to help determine the likely cause of the capsize. The survey confirmed that the starboard derrick and trawl gear had been topped while the port derrick was still deployed in its trawl position, and the warp length had been reduced to approximately that of the depth of water at the capsize location. The clock in the wheelhouse had stopped at approximately the time of the capsize.

Recommendations have been issued to The Federal Public Service of Mobility and Transport (FPSMT), Belgium, which are designed to provide Belgian fishermen on beam trawlers with a greater awareness of the inherent dangers of fasteners. Additionally, a recommendation has been made to the FPSMT which seeks to minimise the risk that EPIRBs and liferafts fitted to Belgian fishing vessels become entrapped in the event of capsize.