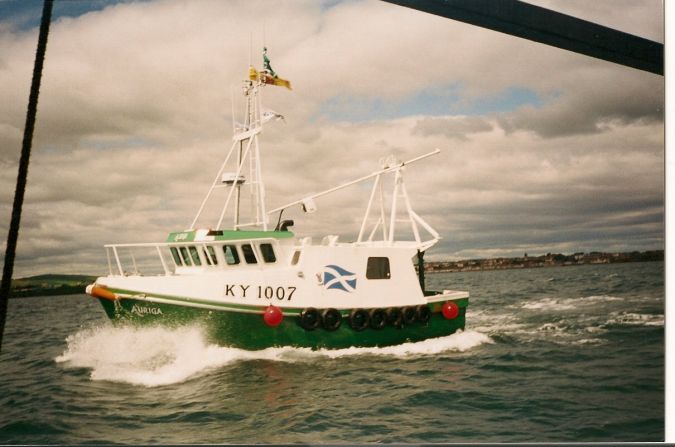 define part timer
Apr 04 2010 04:59 PM
aye went to ireland and sumin happened over there apparently caught a heavy weight and was lifting it up and she hauled her arse under ? who knos id have just broken it oot myself better wi a blootered net than nae boat?

On 30 June 2005, the fishing vessel Auriga (Figure 1) capsized
and sank about 6 miles north-east of Portavogie, Northern
Ireland. The skipper and his crewman were both rescued from
the stricken vessels liferaft. Sea conditions at the time were
slight with light SSE winds.

Auriga was 3 hours into her second tow when she slowed down.
It was felt that possibly a trawl door had dropped, but when
attempts to rectify this showed no increase in the vessels
speed, it left the crew with little option other than to haul the
gear.

As the trawl wires were hove in, it became apparent that there was an abnormal
weight in, or on, the gear; this was indicated by the winch showing signs of strain as
the hydraulic pressure relief valve lifted. Because of the strain on the winch, it took
some time to ease the doors up to the gallows but, eventually, the doors were
retrieved, secured alongside and unhooked from the trawl warps. The sweeps were
transferred from the warp ends and wound onto the net drum; at first the net drum was
able to haul in the sweeps and the wing ends of the net fairly easily, but as the net
built up, the net drum hydraulic relief valve, like the winch before it, started to lift, and
hauling slowed dramatically. At that point, there was no indication of what was causing
the weight in the net. The crew were able to retrieve the dog rope, which led from the
wing lastridge1 to the cod end. This allowed them to haul in this rope onto the winch
drum ends by leading the dog rope up and over the gantry above the fish hopper.
Slowly, by systematically hauling on the dog rope and winding slack netting onto the
drum, recovery of the net continued. Until then, the boat had been idling at dead slow
ahead before the wind. To take strain off the gear, the skipper put the vessel into
neutral; once in neutral the vessel started to fall off the wind and, as this happened,
the weight of the net, suspended from the gantry, affected the vessels transverse
stability, resulting in a dramatic list. This was not recognised until after starboard deck
edge immersion had occurred and water was building up on deck.

Recognising their perilous situation, the crew abandoned to their liferaft, without
having time to transmit a distress or don lifejackets. Fortunately, Aurigas EPIRB
floated free as the vessel sank, and its transmissions alerted MRCC Falmouth of a
possible emergency. SAR services were notified and tasked to the scene of the
sinking.

After an hour in their liferaft, Aurigas crew were rescued by a passing container ship,
whose watchkeeper spotted their pinpoint flare. The survivors were then transferred to
the Donaghadee lifeboat and returned to their home port of Portavogie. Neither of the
crew were injured.