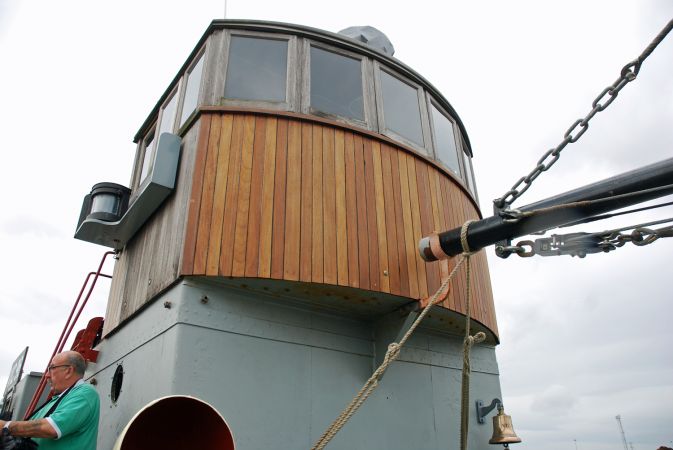 This set of photographs were taken onboard the VIC 96 as she took a break in the Port of Tyne (North East England) from her journey from Maryport where she had been renovated to her new home berth in Chatham. Photographed in Tyne Dock on 26th July 2009 and thanks to the crew for the chance to take a look around this piece of history.

The Trust who restored the Puffer has a web site @ http://vic96.co.uk and says this about the vessel:

"The VIC 96 is a steam coasting lighter, previously known under Admiralty code C668. She was commissioned by the War Office and built in 1945 by Dunston's of Thorne. One of 98 VICs (Victualling Inshore Craft) built, some other VICs were built by Pollock of Faversham, coincidentally close to Sheerness and Chatham where VIC 96 spent a large part of her working life.

Having spent the last 25 years or so at the Steamship Museum in Maryport, Cumbria, VIC 96 was in danger of sinking in the harbour when the Trust was formed. We couldn't bear her to disappear, so with a huge effort (matched only in enthusiasm) we are restoring her and plan to steam her back to Chatham this summer, 2009. SEEDA (South East England Development Agency) has most generously offered a berth in Chatham No. 1 basin, where VIC 96 will be a working exhibit, attending steam fairs and functions in the UK and hopefully Europe too!"

As she makes her way around Britain her progress is marked on a Google Map @ http://maps.google.c...=6&source=embed

Her next leg is from the Tyne to Whitby, leaving the Tyne tomorrow (Tuesday).

Hopefully no one objects to the number of photographs posted but I think this is a unique opportunity to look at some 'living history'.