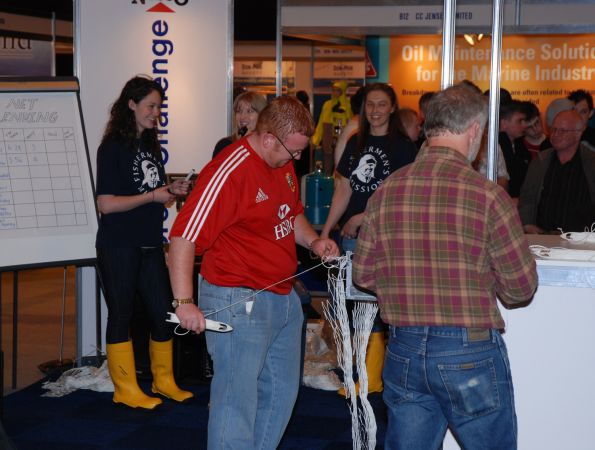 dave222
May 21 2009 12:50 PM
you wouldn't belive it but its so much easier out at sea rolling around than infront of a crowd, and not forgeting the very nice mission girls, there extremly easy on the eye so to speak!

Guest
May 21 2009 12:56 PM
Not sure if the organisers had actually carried out a practice run but it seemed to go on for ever, either that or the mending skills weren't up to scratch

dong86
May 21 2009 08:55 PM
i watched the crew challange on the sat when they was doing the the get ur kit on. tghink i woul o won that na bother if i was fit. am used to tait giving it the throttle all the time un patient.

dave222
May 22 2009 10:05 AM
more than likely my mending skills wernt up too scratch! thats what the old chaps for! (land and chuck them on the key let him worry about it while im in bed lol)

The tough competition aims to find the UKs top commercial fisherman through a series of challenges against the clock that will test their skills and practical knowledge.

As well as a substantial cash prize of £1,000 along with fishing equipment and clothing, the winner will also be awarded with an all expenses paid trip to the Faroe Islands in August to participate in the world net-mending championships.

Organised by Inverurie based global crew information services provider, Crew2crew.com, in association with the Royal National Mission to Deep Sea Fishermen, the Fisherman of the Year competition will be one of the major highlights of Fishing 2010, with as many fishermen as possible being encouraged to register their interest in participating through the specially created competition website, www.foty2010.com

The format will involve heats on each morning of the exhibition, with semi finals on the Thursday and Friday afternoons and the final on the Saturday afternoon (22 May). During the heats fishermen will face a variety of trials against the clock, including net mending and splicing skills, a hydrostatic liferaft release competition, a knowledge test, and a speed trial for donning an immersion suit and lifejacket.

The top five fishermen from each heat will then go forward to the semi-finals that will involve a similar series of gruelling tests, with the first and second placed contestants winning a place in Saturdays final. The winner and the runners ups will be in line to win a number of prizes  including clothing and safety equipment - with an equivalent cash value of at least £5,000, although this figure could rise to as much as £6,000 as more sponsors come on board.

Graham Duncan, managing director of Crew 2 Crew, said: We are delighted to have been able to organise this competition in association with the Fishermens Mission. This will be a real test of skill and knowledge under the pressure of the clock and the winner really will be deserving of the title of Fisherman of the Year 2010.

We wanted to organise something a little bit different for the exhibition that would prove a magnet for fishermen to attend. We envisage that the competition will create friendly rivalry between fishermen from different areas of the UK and the various fishing sectors.

Sharon Kane of the Fishermens Mission said: We are delighted to be associated with this competition. There are a whole range of difficult skills and knowledge that a commercial fisherman needs to acquire and this competition will provide a superb showcase of the unique talent within the fishing industry.

Fran McIntyre, managing director of QD Events, the organiser of Fishing 2010, said: We believe there will be a huge amount of interest in this competition and we encourage fishermen to register their interest in participating as early as possible.

Fishing 2010 will be held at the SECC in Glasgow from 20-22 May. More information at www.fishingexpo.co.uk

bfsanders
May 07 2010 12:42 AM
the only race id win wid be chasing at dollybirds roon the bedroom,,but am hopin t see some of the lads from the site scoopin 1st prize!!